More About This Breed

The Scottish Fold kitten is a breed of domestic cat with a natural dominant-gene mutation that affects cartilage throughout the body, causing the ears to fold, bending forward and down towards the front of the head, which gives the cat what is often described as an “owl-like” appearance. The Scottish Fold which originated in Scotland in the 1960s, are famous for their small floppy ears.

These cats are loving, social and smart, more reason they make a great addition to families of all sizes and ages. Scottish fold kittens make great, affectionate pets that thrive on human interaction without being too demanding for your constant attention. They have a charmingly unique appearance due to their ear carriage, round heads and eyes, and also with their thick legs and tail. Scottish Fold kittens are born with what look like normal ears, but the ears soon begin to bend forward, usually two to four weeks after birth. By the time this kitten is three months old, it typically tends to have a distinctly owlish look, thanks to the unusual carriage of his ears.

A Scottish Fold kitten is also very sweet and calm, besides they are adaptable to many different environments and can get along well with children, other cats, and friendly dogs. Scottish Fold kittens  frequently stand on their hind legs, for all the world like meerkats on a nature show, or they can arrange themselves in other unusual positions. They like to play fetch and will follow their people around the house. You’re never lonely when you have a Scottish Fold kitten. It isn’t a talkative breed, but when he does make noise, it’s in a soft, small voice. 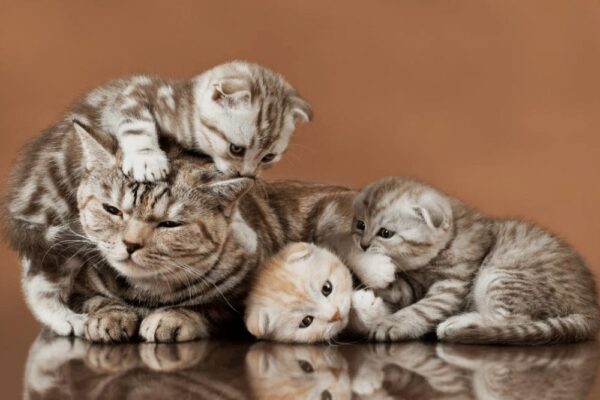 The Scottish Fold is charming, friendly, and easy-going. They quickly become a close member of any family, adapting to both children and other pets, thanks to their sociable disposition. This affectionate cat love to spend time with their families, being involved in whatever they are doing.The typical lifespan of a Scottish Fold is about 15 years, but, since this is a hardy, special breed with certain health issues, their lifespan can differ, more like many breeds, the Scottish Fold can be predisposed to some health problems that could be life threatening. Degenerative joint disease can be an issue, especially in the tail which should be handled carefully if stiffness is noticed.

This disease can result in a decreased range of motion in the joints.And also not excluding Hypertrophic cardiomyopathy, which is a form of heart disease, can also be an issue. Annual physical examinations is recommended as a remedy to some of these health issues, but especially for early detection of health problems. The most important aspect is breeding, because when a Scottish fold is properly breed, it is bound not to develop any health problems. On average, these cats can live to be 11–15 years old, which can be associated to a number of factors such as a cat’s living environment, their daily health and exercise routine, and whether they have any pre-existing health conditions.